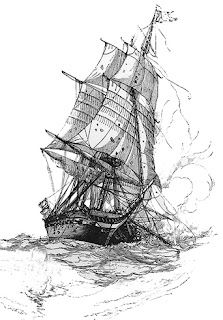 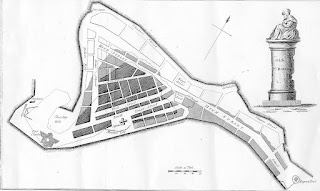 Pirate Haven Destroyed!   June 7, 1692 (11:43 am): Known as a pirate haven and as "one of the wickedest places on Earth," Port Royal was, at the time, the unofficial capital of Jamaica and one of the busiest and wealthiest ports in the Americas, as well as a common home port for many of the privateers and pirates operating on the Caribbean Sea. Two-thirds of the town, amounting to 33 acres, sank into the sea immediately after the main shock. According to Robert Renny in his An History of Jamaica (1807): "All the wharves sunk at once, and in the space of two minutes, nine-tenths of the city were covered with water, which was raised to such a height, that it entered the uppermost rooms of the few houses which were left standing. The tops of the highest houses were visible in the water and surrounded by the masts of vessels, which had been sunk along with them." Before the earthquake the town consisted of 6,500 inhabitants living in about 2,000 buildings,
Read more
July 30, 2021 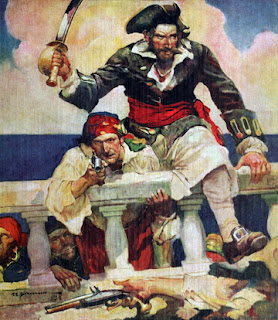 Blackbeard Just Broke Copyright Law, and Now States Are the Pirates Copyright law has a huge blind spot — a blind spot that only came to light because of Blackbeard . There is no honor among thieves pirates states, and about a year after North Carolina promised not to infringe Allen’s copyrights, the state passed “Blackbeard’s Law,” which stated that “all photographs, video recordings, or other documentary materials of a derelict vessel … shall be a public record,” and that Allen’s agreement with the state was “void and unenforceable.” READ MORE #artsandentertainment #piracy #northcarolina #shipwreck #shipwrecklaw #maritimeheritage #Pirates #NautilusProductions #Blackbeard #Documentary #StockFootage #Privateer #Archaeology #EdwardThache #copyright #QueenAnnesRevenge #McCrory #FriendsofQAR #NCDNCR #BlackbeardsLaw #NCFilm #Blackbeard300 #IntellectualProperty #lawsuit #SovereignImmunity #SCOTUS #SupremeCourt #NPPA #asmp #CopyrightAlliance
Read more
May 27, 2021 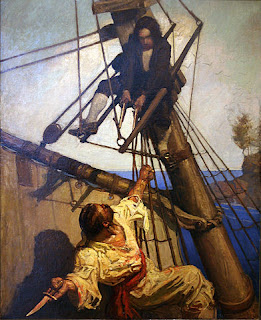 Israel Hands Testifies! May 27, 1719: Following his capture, Blackbeard's first mate and fifteen others were taken to Williamsburg, Virginia, to stand trial. In exchange for a pardon, Hands testified against corrupt North Carolina officials with whom Teach had consorted. The minutes of the North Carolina Governor's Council for May 27, 1719 state: "Hesikia Hands[,] master of Capt Thaches Sloop Adventure [,] seems to sweare possitively in his Depossition that the sd [said] Thache went from Ocacoch Inlet at his returne into this Country from his last voyage with a present to the sd Tobias Knights house [,] when by the same deposition [Hands] acknowledgth that to be out of the reach of his knoledge[,] he being all the time at the sd Inlet which lyes at above thirty leagues distance from [Knight’s] house and further the [said] Tobias Knight doth pray your Honours to observe that the aforsd Hesikias Hands was ... for some time before the giving of the [said] Evid
Read more
May 11, 2021 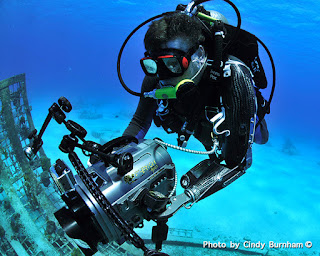 DAN Member Profile: Rick Allen Rick Allen strapped on his scuba gear and peered over the edge of the barge. He’d made this same dive to Blackbeard’s infamous shipwreck, the  Queen Anne’s Revenge , more than 200 times before — but not like this, not since his life-altering accident on Jan. 3, 2011.  READ THE STORY
Read more
April 28, 2021 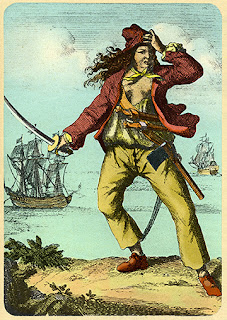 Pirate Mary Read Buried! April 28, 1721: Mary Read, whose pirate associates included Blackbeard, Calico Jack Rackham and Anne Bonny, died of a violent fever while in prison. Her burial on this day is in the records of St. Catherine's church in Jamaica. She had been spared the noose because she was believed to be with child but here is no record of the burial of her baby, suggesting that she may have died while pregnant. READ MORE #artsandentertainment #piracy #northcarolina #shipwreck #shipwrecklaw #maritimeheritage #Pirates #NautilusProductions #Blackbeard #Documentary #StockFootage #Archaeology #EdwardThache #copyright #QueenAnnesRevenge #McCrory #history #FriendsofQAR #NCDNCR #BlackbeardsLaw #NCFilm #Blackbeard300 #IntellectualProperty #lawsuit #SovereignImmunity #SCOTUS #SupremeCourt
Read more
January 30, 2021 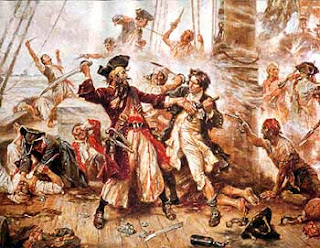 When the State Becomes the Pirate!  In Virginia, four men testified that after they helped Blackbeard capture the Rose Emelye , Blackbeard left the French ship and most of the crew in Ocracoke Inlet while the four carried Thatch and some of the booty inland in a smaller boat. In the wee hours of the night, the pirates arrived at Tobias Knight's property — the four crew members unloaded three or four kegs of sweetmeats (sugary food or fruit in the candy/confectionery family), loaf sugar, a bag of chocolate, and several boxes (contents unknown). According to their testimony, Thatch was in the house with Knight until about an hour before dawn, when the pirates all left. On their way out of the Bath area, the men said Blackbeard leapt aboard a small boat they encountered, demanded strong drink, got into a fight, and robbed the small crew of cash, a case of pipes, a cask of strong drink, linen, and other various and sundry items before continuing to Ocracoke. READ MORE #
Read more
More posts

Rick Allen
Rick Allen, of Nautilus Productions LLC, broadcast video producer and cinematographer, has been producing documentaries and shooting video since 1983. As a video producer, director and videographer his work has appeared on ABC, A&E, BBC, CBS, Discovery, TLC, National Geographic, 48 Hours, ESPN, Lifetime, Turner and more. He has followed SWAT teams through the door on drug busts, traveled from Cuba to Kazakhstan with the 82nd Airborne, weathered live broadcasts during hurricanes and gone nose to nose with 14 foot Great White sharks during underwater expeditions. For nearly two decades he has been the project videographer on and licensed footage from the Queen Anne’s Revenge Shipwreck Project. After 12 years in broadcast television Allen opened his own video production company in 1997 focused on documentary production as well as providing freelance production and underwater video services to broadcast, corporate and government clients.